About Rockpointe Condominiums. If you are thinking of calling the Rockpointe Community your home then maybe this information will convince you to make the move. 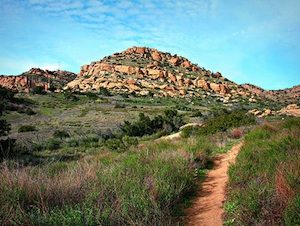 This historic park located in Chatsworth, Ca where the Santa Susana Mountains meet the Simi Hills has natural, historical and cultural significance. High, narrow ridges and deep canyons and a variety of plant life make this a hiker’s dream. Panoramic views of the natural, rugged landscape makes one forget that they are in Los Angeles.
The Devonshire Street entrance and alternate entrance on Jeffery Mark Court to the park are closed for an environmental cleanup of what was once Roy Roger’s shooting range and is now Chatsworth Park South. The bullets caused lead contamination which resulted in the demolition of 166 ash and sycamore trees, the removal of about a foot of topsoil and ultimately the closure of the park for the last eight years. It was proposed that the park be paved over and turned into a parking lot. ( Yes, they were going to “Pave paradise and put up a parking lot” ) but that was stopped dead in its tracks by local residents including residents of Rockpointe. Thank-you! Chatsworth Park South is supposed to reopen this year and promises to be better than ever. You can find more information from Parks and Recreation
Check with the Foundation For Preservation Of The Santa Susana Mountains website for alternate access to the Santa Susana State Historic Park 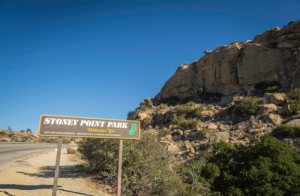 Stoney Point or Stoney Point Outcroppings as it is also called is located in Chatsworth, CA and is part of the Los Angeles park System. Stoney point is poplar with hikers, rock climbers and equestrians. Make it to the top and you will be able to enjoy amazing views of The Santa Susana Mountains, The San Fernando Valley, Coyote Pass and Chatsworth. You may also catch a glimpse of some of the wildlife including rattlesnakes, coyotes, eagles, hawks, vultures, skunks and rabbits.
The park is best know however for its bouldering and rock climbing and is used as a practice area by many. The sandstone rocks is easier on the hands while bouldering but this also makes the rock soft and easy to break off. Enjoy but be careful!

Looking for a place to have a cold one, listen to live country music and maybe learn to line dance? The Cowboy Palace bills itself as the “Last Real Honky Tonk” and for good reason. A hitching post for your horse is right outside the doors and there is no cover charge. Don your best country garb and don’t forget your cowboy hat.

Reviews on Zillow
2623075
"Heather Farquhar and Todd Riley helped me sell our condo and buy our home. They make a great team when it comes to selling and buying property. They ... more "

5.0/5.0
by wendyreininga
2450667
"Heather Farquhar is the most reliable real estate broker I've ever met. Integrity is her middle name. Heather has walked me through six real estate ... more "

5.0/5.0
by fulllunar
1119785
"I was a very nervous first-time home seller and Heather made the process really stress-free. She was very responsive and always answered every ... more "